The Davao City Tour should start at 7am ~ 8am 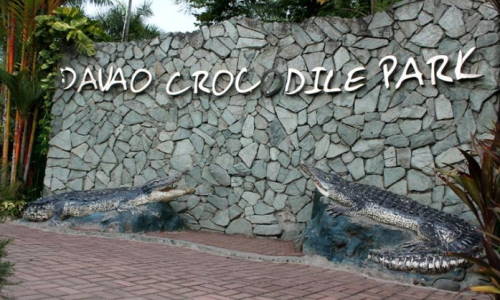 Considered as one of the finest tourist attractions in Davao, Philippines, Davao Crocodile Park boasts thousands of its self-nurtured Crocodiles as well as a wide variety of flora and fauna. It is a home to the tamed wildlife beasts which are nourished and given world-class care. Davao Crocodile Park boasts its one of a kind zoo which housed different animals such as crocodiles, birds, snakes, monkeys among many others. 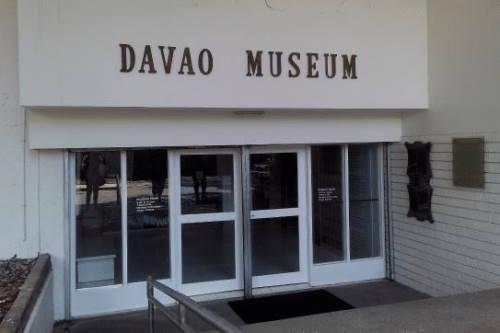 Davao Museum, If culturally-inspired artwork and vintage maps are your thing, then the Davao Museum is for you. This two-story building located inside Insular Village in Lanang is quite bigger than Museo Dabawenyo so dedicate at least an hour to touring this amazing space. Focusing on cultural minorities within the Philippines, you’ll get a glimpse into their cultures with a large collection of artwork and memorabilia. 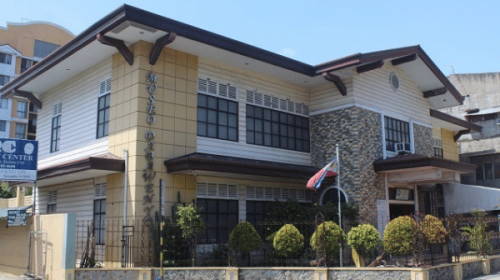 Museo Dabawenyo now stands to represent the rich history of the people of Davao. The aim is to teach people about the diverse cultural heritage on this island via beautiful artwork, historic photos, and informational monuments. There is the Indigenous People’s Gallery with replicas of stilt houses, musical instruments, and weapons, the Moro People’s Gallery full of antiques such as crowns, armors, chairs, and lamps, the Contemporary Gallery where you can see traditional Filipino clothing, and the Memorabilia Gallery that is home to Filipino bills, clothes, musical notes, and more. 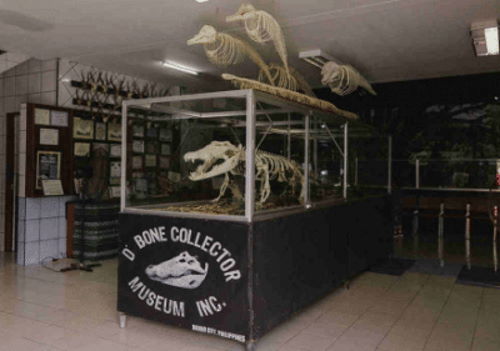 D’Bone Collector museum is a comprehensive collection of skeletal bones from animals of all kinds, including the skeleton of a 41-foot Sperm Whale. There are over 200 preserved skeletal remains that represent species from every walk of life and every environment you could imagine. The museum was opened in 2012 by an American missionary with a fascination for more than just the religious world beyond. 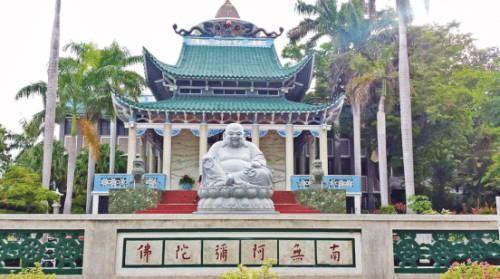 The Longhua Temple, also known as the Lon Wa Buddhist Temple is one of the biggest Buddhist temples in the Philippines and the biggest in the island of Mindanao. 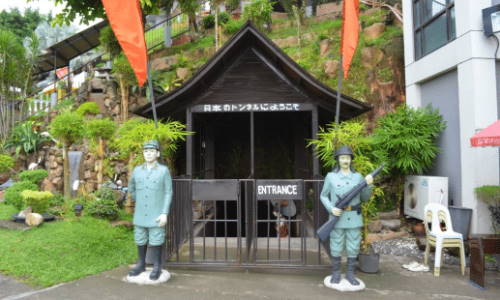 The tunnel was used by the Japanese as a hide-out, and as a means of transporting their equipment and mobilizing their forces against the American liberating army. It was accidentally discovered by the owners of the land while constructing a hotel. They were excavating the area when they uncovered damp passageways and rooms underneath the land, and soon discovered that those were tunnels used by the Japanese soldiers during the war. 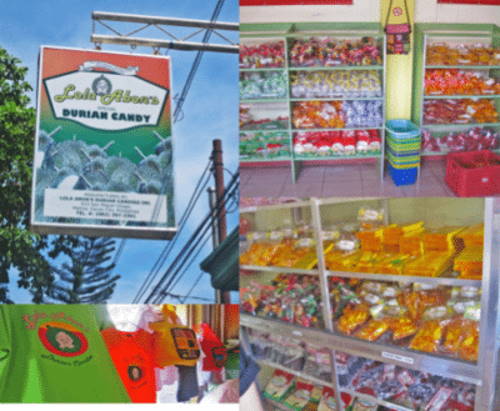 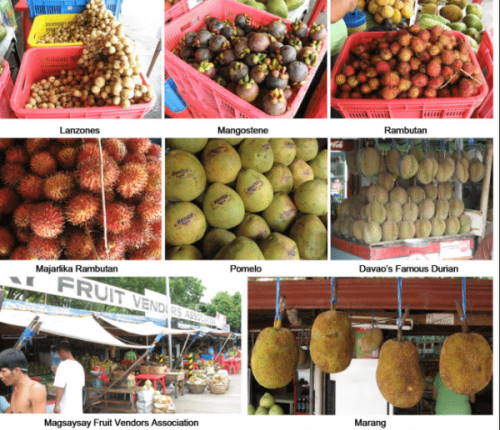 Fruit Basket of the Philippines, Davao is one of the world’s leading producers and exporters of bananas, papayas, mangosteens, and even flowers. Davao’s rich fertile volcanic soil makes it most suitable for sustained production of the freshest and tastiest tropical fruits in the Philippines. Since the fruits are locally produced, the prices are comparably much cheaper than anywhere in the country. 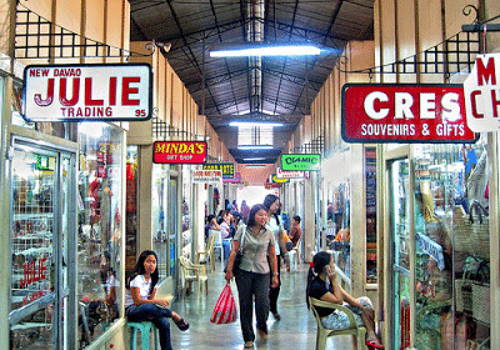 ALDEVINCO is an arts and crafts gallery of its own as it showcases the culture and heritage of the Mindanaoan. Here, you will find genuine Mindanaoan products, antiques, and a wide variety of colorful souvenir items – from mats, brooms, table cloths, and other house ornaments and accessories, musical instruments, tribal swords; to various Batik product, clothes, shawls, jewelries, and ethnic fashion accessories like dangling earrings, bracelets, necklaces and anklets of beads and brass — an all-time fashion favorite in Davao City.

The Roxas Night Market has been drawing attention not just to Davaoeños but also to visitors as well. 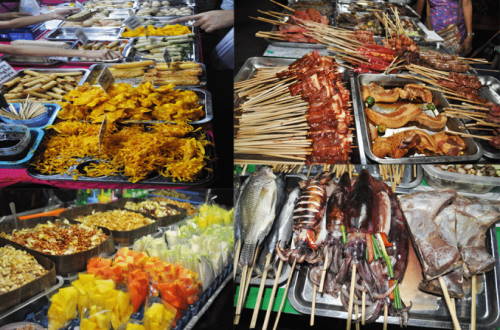 This particular night market located in the heart of Davao is a one-stop shopping and dining destination. Here, you can savor the local favorites such as barbecue (chicken, pork, tuna panga, and chicken innards), chicken skin, butchi (the matcha butchi is the bomb), Mang Danny’s ice cream (became an overnight sensation; people are willing to queue for up to hours), and a whole lot more. If you’re into thrift shopping, the whole stretch of Roxas Avenue is all yours. 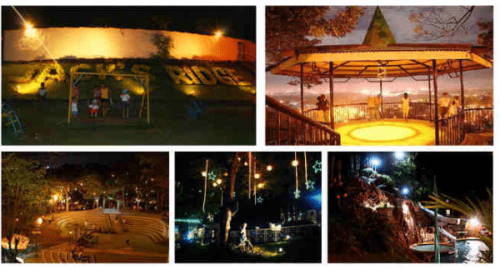 Jack’s Ridge Resort & Restaurant is a cool place to hang out during your trip in Davao City. It’s a charming elevated spot where you can succumb on a fantastic meal while enjoying a nice view of the city’s landscape. It has a good variety of fine dining restaurants that were placed in strategic positions so that every visitor can have the liberty of picking a restaurant of choice without missing the fantastic view. Their names are Taklobo Restaurant, Kai’s Bar and Grill and Karlo’s Gourmet and Coffee. 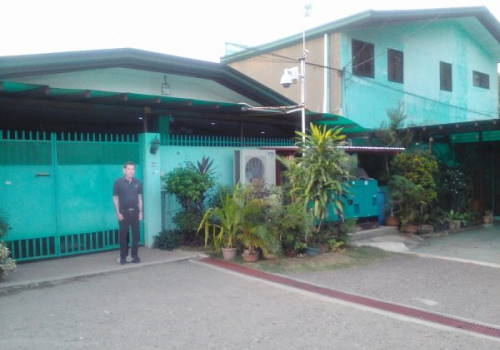 Doña Luisa Subdivision Phase I is a small middle-class community located in the suburb of Matina.

Lately the subdivision has become a destination of sorts for tourists and residents alike. A plain-looking green house in the edge of Doña Luisa’s Sapphire Street is the home of the long-time City Mayor Rodrigo Duterte, now the country’s 16th President.

A visit to the President’s house is the focal-point of the “Duterte Tour” spearheaded by the Department of Tourism.