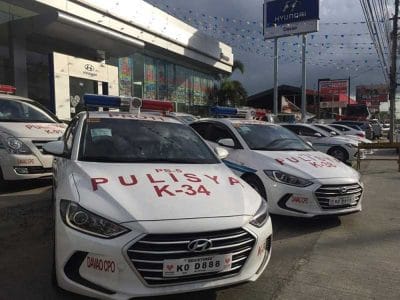 A TOTAL of 12 brand new units of Hyundai Elantra mobile patrol cars and two Starex vans were donated by the government of South Korea to the Davao City Police Office (DCPO).

DCPO director Police Senior Superintendent Alexander Tagum, in an interview on Tuesday, October 16, said he is thankful for the vehicles given by South Korea as part of its official development assistance to the Philippines.

He said there were already several vehicles that have arrived in the city but some are still being shipped.

Tagum added that this will be a great help in the logistics of the DCPO to enhance its police visibility and for quick response should there be a call for police assistance.

“The people of Davao City is assured na mas marami ang police visibility because of the additional logistics capability that arrived in Davao City Police Office. There will be no excuse on the part of the cops to not respond to incidents because there are already new vehicles,” he said.

The DCPO chief added that DCPO is one of the police units in the country with high number of patrol cars. To date, they have now around 100 patrol vehicles.

The donated Hyundai Elantra vehicles will be distributed to all 12 police stations under DCPO, however, he said that they will replace the one that will be given to Paquibato with another model because of the terrain there and security.

The vehicles are expected to be officially turned over within this month.