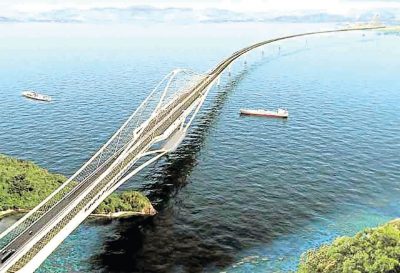 THE REGIONAL Development Council (RDC) has approved the alignment of the proposed PHP 9 Billion bridge that will connect Davao City and the Samal Island or the Island Garden City of Samal (IGACOS).

The option that was approved early this week is from the Lanang Azuela Cove on the Davao side to the closest point in Samal, based on RDC documents.  The Samal point will be connected to the island’s circumferential road.

The bridge will be 2.62-kilometers long with only about 900 meters traversing the sea.

Ivan C. Cortez, head of the Davao City Planning and Development Office, yesterday said the RDC considered several other options, including a tunnel that was eventually assessed to be too costly.

“With the bridge, bigger vessels like Panamax will have to circle Samal to avoid Pakiputan Strait.”, Mr. Cortez added.

The proposed Davao-Samal bridge has been identified as among the big ticket projects under President Rodrigo R. Duterte’s administration.