Dutertes All in; Baste Guns for Vice Mayorship in Davao City 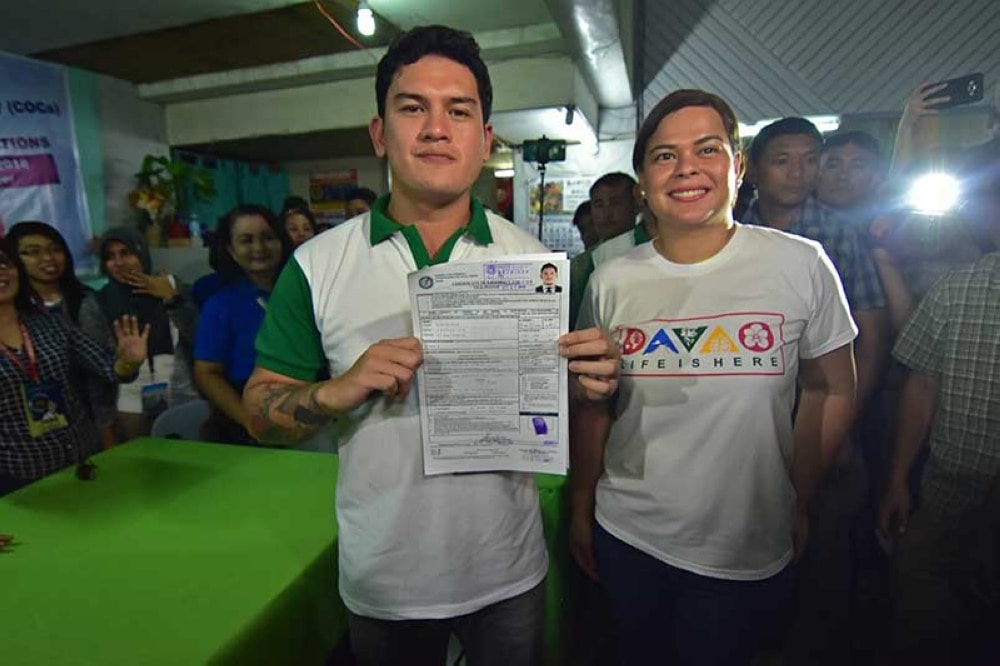 THE three children of President Rodrigo Duterte with Elizabeth Zimmermann are now all into politics, with Sebastian “Baste” Duterte filing his certificate of candidacy (COC) for vice mayor of Davao City on Wednesday, October 17, the last day of filing.

After days of waiting on who will be Davao City Mayor Sara Duterte-Carpio’s running mate, Baste arrived at the Commission on Elections (Comelec) around 12 noon. He was accompanied by his older sister.

“Naisip ko lang na I was born in Davao City. I’ve been to places but my heart is always here,” Baste said, adding that he really wanted to serve the public.

Baste said he talked with his father about his plan to run and the President approved it, but the final decision was his alone.

“Wala naman sila [family] masyadong sinabi sa akin, basta ayusin ko lang daw ang trabaho ko (The family did not say much to me but to make good of the job) ,” Baste said.

Incumbent vice mayor Bernard Al-ag said Baste has his full support in his decision to run for the position.

“I will make sure that we will have a smooth transition from VM Al-ag to VM Duterte next year,” Al-ag said.

Meanwhile, Baste admitted he still does not know what he can offer to the city should he win the election.

Though he grew up in a political family, with his father as long-term mayor in the city and now the president of the country, he said he still lacks the experience.

Duterte-Carpio mentioned last Monday that Baste was undecided with the decision to run for the said position but he said that it was only because he was asked too soon.

Meanwhile, Councilor Mary Joselle Villafuerte said in a text message to SunStar Davao Wednesday that it is an exciting time for city.

“Since 2015 during the Presidential campaign I have observed Sebastian “Baste” Duterte to be “maka masa”or malapit sa masa, possessing the same charisma and brand of leadership of Mayor Rody Duterte. We look forward to very exciting times in the city’s legislative branch,” she said. Stephen Antig, executive director of Philippine Banana Growers and Exporter Association (PBGEA), for his part, said “Do not really know him so cannot comment [but] hoping he will do a good job once elected. Let us give him a chance.”

Sara earlier said she is seeking re-election as mayor because she hopes to complete the projects for the city that she started. She said her position as city mayor will allow her to effectively support her father.

When asked about the possibility of Pulong as congressman of the first district and Baste as vice mayor of the city, she said the Dabawenyos can expect a kind of leadership from them that was taught by their father, President Duterte.

“Tinitignan kung ano ang mga issues and challenges ng mga tao na dapat kailangan i-address. So that is the kind of leadership that that can expect,” she added.

Meanwhile, Sara said she did not intend to withdraw or to request for substitution.

“I am very firm with the decision to be the mayor of Davao City,” she said.